Like last year’s Summer Tournament, this year’s will not be foiled by coronavirus: games can still be played online. The pairings are made by event organiser Malcolm Clarke in the usual way, and the time control is still 90 minutes per player each game. The games can played online at lichess.org.

The Summer Tournament usually plays out at a pace of about a Round per month over the Summer. When the pairings are announced for each Round, the first-named of each pair plays White.

The 2020 Summer Tournament will seem a strange one in the time of COID-19 social distancing. But essentially, the core aspects remain the same: players will be paired against each other in a series of Rounds over the summer months, vying for the Kooner Cup.

It’s just the ‘how’ that will be different: games will have to be played in which the players are not facing each other across the board.

This is where online platforms such as lichess.org or chess.com provide a solution. On these platforms, games can be set up for the time control desired (in our case this is 90 minutes each as default).

Email or text or other solutions may also enable games to be played.

The Tournament organiser, Malcolm Clarke, has now made the draw for the First Round of the 2020 Chandlers Ford Summer Tournament:

The 2019 Chandlers Ford Chess Club Summer Tournament champion is Phil Overton. He was presented the prize, the Kooner Cup, by John Kooner. The 2019 tournament had been a well-fought competitive tournament.

The 2019 Summer Tournament began in April. It is organised and run by our club secretary Malcolm Clarke, and is a 5-round Swiss in its format. It is one of three of the Club’s Tournaments. When the pairings for each round are announced, the first-named player has the white pieces. The odd number of players means byes are inevitable, but no player will receive more than one bye. The winner will have their name engraved on the Tournament’s trophy, the Kooner Cup.

Malcolm Clarke: “With only one game to be played in this year’s summer tournament I can make most of the round 4 draw: 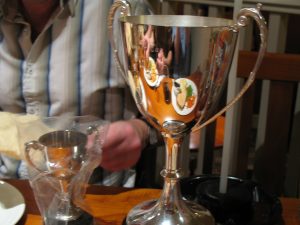 The Kooner Cup and replica 2008

The Summer Tournament has been played each Summer for a number of years – since we used to meet at our former venue at Eastleigh’s Railway Institute. The games are all ECF-graded games. The Kooner Cup is presented at a sociable get-together by John Kooner who kindly provided the original trophy and the replicas.

The 2018 Summer Tournament was won jointly by Manoj Chandar and Sam Murphy.